Our team is capable of delivering equipment for the mining industry using the following materials:

Widely used in crushing, grinding, milling and for the handling of abrasive materials such as ores and minerals, abrasion resistant cast irons are commonly divided into three types:

These are unalloyed cast irons with a low silicon and carbon content. White iron is limited in its applications because of its lack of resistance to impact and the difficulty that occurs in maintaining the structure in thicker sections. In some cases, a casting will be produced to have a ‘white structure’ in a certain area, and a ‘grey structure’ in other areas in order to improve its toughness.

These irons contain nickel and chromium, with two general types:

Both these types have a structure of iron and chromium carbides, but because of the higher alloy content exhibits a type of carbide, which confers and discontinues a greater impact and resistance to corrosion. Capable of being used as cast, heat treatment aids in improving hardness as well as resistance to spalling and surface cracking.

These irons have a typical composition of 15% Cr – 3% Mo and 23% - 28% Cr. With a superior combination of both toughness and resistance to abrasion, these irons can in some cases be used as cast, but is commonly hardened in order to develop the optimum set of properties. Some irons may also be machined after annealing processes and then hardened – effectively producing a machined abrasion resistant part.

Below Below you will find a number of characteristics for abrasion resistant cast irons: 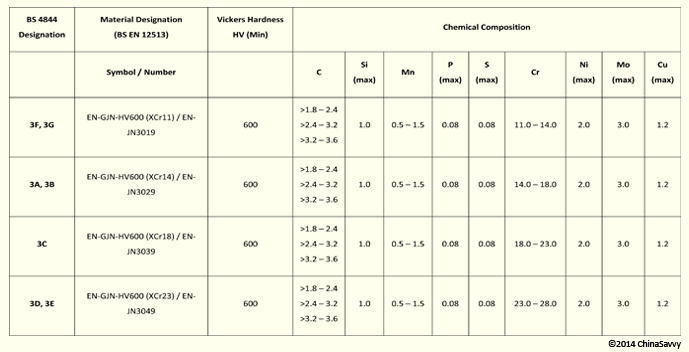 Produced by taking a normal grey and ductile iron melt, carbon and silicon is controlled at lower levels and mining engineering companies adds various alloys in order to produce a stable austenitic basic structure at an ambient temperature. Here, Nickel is the main alloying element used and is the principle reason for the austenitic structure produced.

The Nickel makes these types of casting more expensive than ductile or grey iron castings, but when compared to equivalent alloyed steel, it is more affordable.

Listed in the table below you will find grades used by mining engineering companies as well as some of these grades’ characteristics:

These materials are produced by applying an austempering heat treatment to alloyed ductile iron. This process produces a matrix microstructure of fine acicular ferrite and austenite – this is called ausferrite.

ADI has an outstanding mechanical properties ranging from a good ductility and good fracture toughness, to a very high strength and high fatigue strength. It also exhibits an excellent resistance to wear, making it suitable for use in the mining industry. ADI also had a lower density and lower production cost – factors that have played a role in replacing heart treated steels and high cost forged steels in various applications.

The table below contains four material designations along with some of each material’s characteristics: 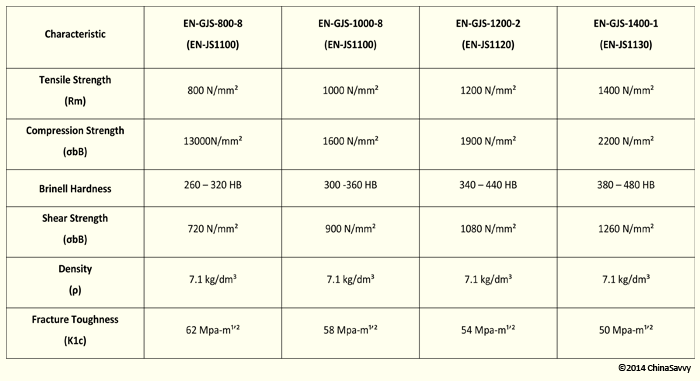 Also known as grey iron, this is a type of cast iron that has a graphite microstructure and is a common alloy used by mining engineering companies. It has a relatively low cost, good machinability, good resistance to wear and galling and excellent damping capacity.

Below you will find a number of characteristics of four different material designations: 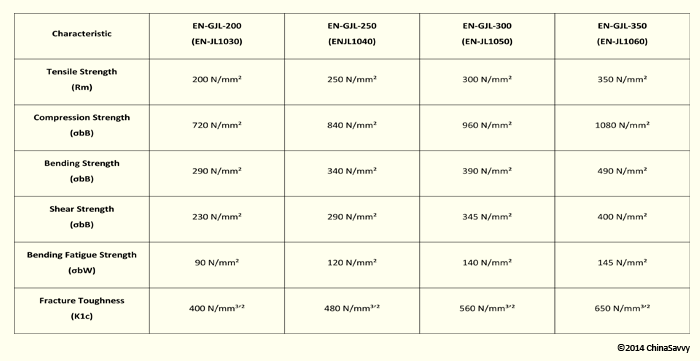 Also known as ductile cast iron or nodular cast iron, it was invented in 1943 and, while most cast irons are brittle, these irons have more fatigue strength as well as impact strength. This is due to the nodular graphite inclusion.

Here, the graphite is in the form of nodules and not flakes as seen in grey cast irons. The most production of ductile iron is in the form of pipe and is also a useful component in a number of automotive components where the need for strength is higher than aluminum can provide, but do not necessarily require the strength provided by steel.

Spheroidal graphite cast irons are used in applications where where optimal impact and fatigue strength is required, as well as where there is a need for electrical conductivity and magnetic permeability.

The table below list nine material designations along with a number of characteristics: 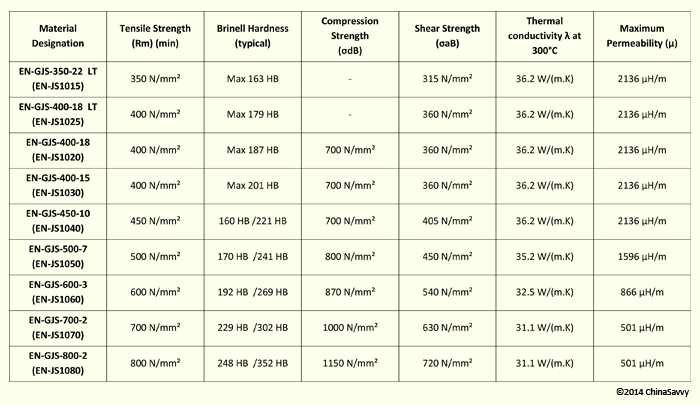 If you would like to learn more about the manufacturing services we provide to the mining industry, please feel free to visit our mining services section.

Back to Main Page: Mining Engineering.